On-line gaming has given players the chance to analyse and share their performance data. Pro-sport broadcasting has shown how detailed analysis of competitor data can add to the understanding of what’s going on in a match or tournament. Now sporting technology innovator GAME is bringing those same ideas to all golfers with their new player performance data sharing system.

GAME uses RFID tags and devices with GPRS, motion sensing and other data capture tools to allow golfers to collect, analyse and share how their play develops.

CoreRFID has worked with GAME, providing the RFID tags used at the heart of the GAME golfing system.

Changing The Golfing Experience For Everyone

The GAME system lets golfers build their own base of statistics on every game they play, helping them improve their game by recording every club used, swing made, yardage hit and so on. Players can access their records of key statistics; scores, putts, greens in regulation, driving accuracy and so on. GAME gives golfers the same insights into their own play that we’ve all got used to when watching TV pundits analyse professional players. More than that, it adds a social networking dimension, letting golfers share their performance with friends on Facebook or Twitter and connecting with other GAME network users in challenges and to share course tips. 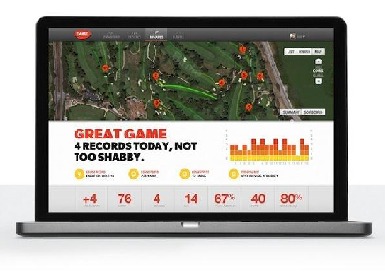 The system is based around the use of RFID tags attached to the shaft of each club and the use of a motion and position sensing box worn by the golfer. Data collected by the box can be uploaded, allowing it to be used to analyse player performance in the search for lower scores or just for getting bragging rights in the bar!

GAME GOLF was started in Galway, Ireland by John McGuire and a small team of engineers and now operates out of Galway and San Francisco. GAME has worked with golfer pros Lee Westwood and Graeme McDowell and design specialist Yves Behar and his company, fuseproject, to realise the system. In the UK, CoreRFID has worked with GAME to supply the tags used to identify clubs. It is yet another example of how RFID technology can change the way in which things are done, making possible new ways of collecting data.

“Working with CoreRFID on the custom tag design needed for the GAME system has been easy – helping us to meet our technical objectives and development deadlines.” John McGuire Founder & CEO : GAME

How Does It Work?

The GAME system works by using a combination of RFID technology and the GYG (“Game Your Game”) device that measures the golfer’s personal performance using an accelerometer, GPS, electronic compass and an RFID reader.

A GAME package includes a GYG device and RFID tags that attach to the golfer’s clubs. At each stroke the player touches the club tag to the GYG device, registering the specific club for the shot. Data collected by the GYG device can be uploaded to the GAME network and accessed using smartphones, tablets or personal computers, showing the player’s performance in graphs, tables or on digital maps of golf courses.

A GAME package includes a GYG device and RFID tags that attach to the golfer’s clubs. At each stroke the player touches the club tag to the GYG device, registering the specific club for the shot. Data collected by the GYG device can be uploaded to the GAME network and accessed using smartphones, tablets or personal computers, showing the player’s performance in graphs, tables or on digital maps of golf courses.

The CYG has enough data capacity and battery power to collect information for two rounds of golf before needing to be recharged and have its data uploaded. The data can be used by the player to analyse their performance, shared online or used as the basis of tournaments where players compete at different times or even on different courses.

The standard package includes the GYG device and 18 club tags, 14 specific to the most commonly used clubs from driver to putter and four extra tags for any other clubs. Players also need a subscription to the GAME service. Performance data can be viewed on an iPad or iPhone or via any web browser. An Android based app is also under development.

You can see see a video of the system in action and how GAME are bringing it to market here: GAME VIDEO. Or you can learn more about GAME at their website.

CoreRFID has worked with the GAME team to specify and source the tags used to identify golf clubs. The tags needed to be created with precise custom measurements so that they would fit the top of a club’s grip required and the electronic components needed to be finely tuned to provide the optimal read range when used with the GYG device. With so many varieties of RFID technology and so many ways in which RFID can be put to use, helping customer to identify the right technology and the right version of it is a large part of what we do.