The UK Government, keen to reduce the levels of sexually transmitted diseases and unwanted pregnancy especially among young people, has promoted free access to condoms as an important part of its strategy. London has greater problems than other parts of the UK. To try to ensure a wide take-up of their services and to make it cost effective. The Pan London project decided to trial RFID as a component of the overall project. To date three London Boroughs are using the RFID cards.

In 2007 there were over 40,000 pregnancies to under-18 year-olds across England and the occurrence of sexually transmitted disease among younger people remains disturbingly high. Improving this needs a co-ordinated set of actions by schools, the health service, social services and other public bodies to improve relationship and sexual education and ensure that young people have easy access to contraception, especially condoms.

Part of the response in London, alongside improving sex health education and other interventions, is the C-Card scheme. The Pan-London C Card scheme is designed to ensure that under-25 year-olds can get access to free condoms anywhere across the capital. Under the scheme young people register via their local authority and are issued with their personal C Card. This card can be used to collect free condoms at any of hundreds of issuing points around London. Issuing points include pharmacies, GP surgeries and health centres, young family and youth support centres, schools and colleges, youth offending services, as well as various charities; a demonstration of the collaboration needed across the private, public and “third” sector for this type to succeed.

The card used and details of condoms issued can then be assigned to the borough concerned to provide the basis for cost recovery and to capture the essential information on take-up and usage which will help to measure the value of the scheme. At present 3 London Boroughs have taken the leading role in establishing the approach for the Pan-London C Card, and piloting the technology.

They have now rolled-out the system across 2 boroughs, with a third to follow, with an initial 20,000 RFID cards. During the initial part of the project there were a number of different approaches to providing the identifying card or tag, trying barcodes, a keyed identification number and biometrics (based on encoded fingerprints). RFID was selected for reasons of cost-effectiveness (barcode readers proved expensive for the number of outlets planned), familiarity (Londoners are already familiar with contactless cards because of the popular Transport for London “Oyster” travel card) and because it was felt that using biometrics as an ID mechanism might reduce take up of the scheme. Having decided on an RFID approach, the Pan London Project needed to find a supplier that could meet their needs in terms of delivering personalised RFID cards (branded with the C Card logo), carrying barcode and visually readable code numbers as well as the RFID encoded number. They chose to work with CoreRFID. CoreRFID supplied the cards and arranged customised printing.

“The Pan-London C-Card offers us a great chance to improve take up of free condoms in the capital. CoreRFID has been instrumental in helping us pilot and implement the eventual solution.” – Christine Chapman, Coordinator, Pan London C-Card Project

The Solution At Work

Once a young person has registered they are issued with a C-Card. The card is a standard credit card style with an embedded low frequency RFID chip. The RFID chip contains no personal data as anonymity is seen as important to encourage take up. The card just carries an identifying code which is also printed on the card in a barcode format and as a readable number (to allow the card to be just used as an identifier if needed or in boroughs which have already opted for a barcode approach). 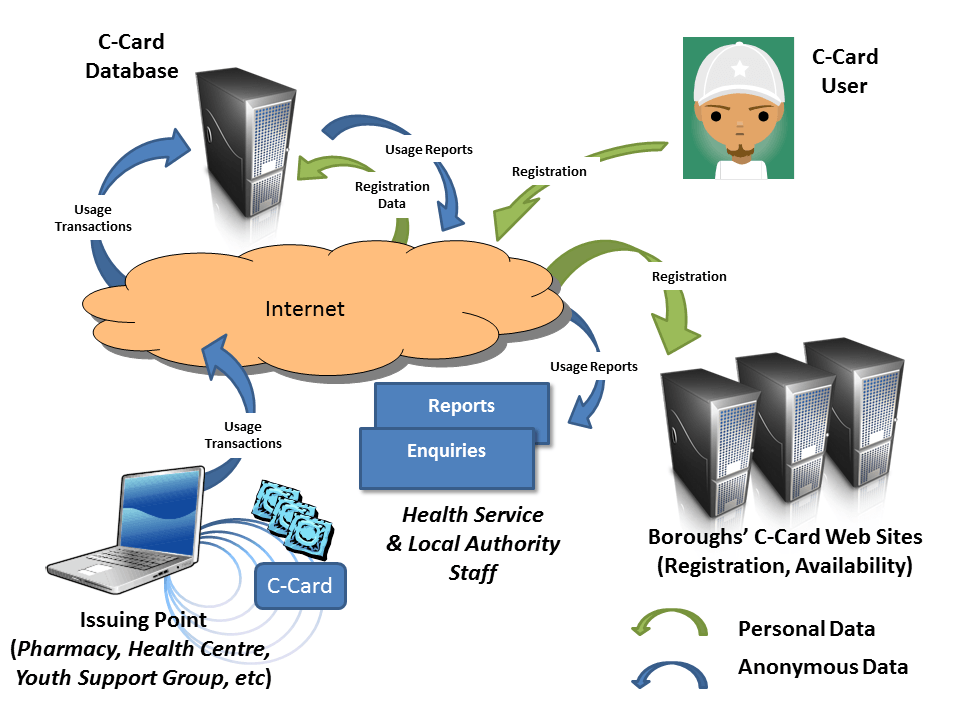 CoreRFID are supplying the RFID cards overprinted with the project’s branding and individual identification data, together with a file containing all the code numbers. The data file is fed into the scheme’s central, secure, database. As young people register on the scheme their data is linked with the number on the card. Each time they request condoms at one of the issuing points, details of the transaction are sent to the central database.

From this database individual boroughs will be able to generate anonymised (no identifiable data that will ID the young person)reports and compare their own success with those of other boroughs, promoting the development of best practice between the boroughs using the system. Because of the number of issuing points a key part of the project was to identify a low cost device that could read the RFID cards and could be simply integrated with computer systems in a wide range of different organisations. To solve this CoreRFID is providing a simple, compact, low frequency tag reader that plugs directly into a PC or laptop’s USB port. A key feature of the pen reader is that it appears to its connected PC as a simple keyboard device, so programming the software to collect the data from the card is simplicity itself.

Find out more about the C Card scheme at the Come Correct web site.