Lowe Rental is an international supplier of refrigeration and catering equipment to the exhibitions, events and retail markets. Based in Northern Ireland, it rents out over 20,000 items from its offices worldwide and supplies many high-profile events from Royal Ascot to the Singapore Grand Prix.

Lowe Rental has been using RFID to track its rental equipment since 2016. The initial system, which was developed by CoreRFID and installed in its operations in Europe, saved weeks of staff time and achieved an almost 100% accuracy rate. It has since been extended to its locations in the Gulf, Asia Pacific and the US and achieved equal success. 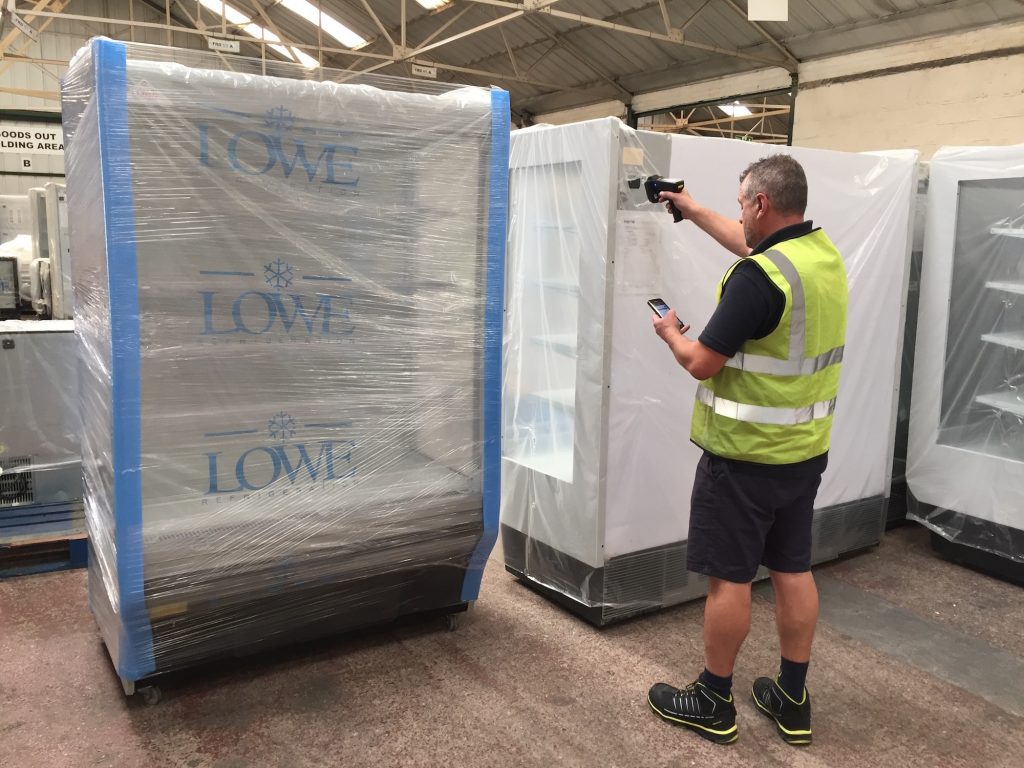 “CoreRFID’s system has transformed our operation. By automating the whole tracking process, it has allowed us to save time and achieve near perfect accuracy levels.
“The solution works well in tandem with our existing systems. Given the massive positive impact it had on our operations in Europe, it was a natural progression to roll it out to other locations worldwide.”

Rental equipment can be checked out automatically

RFID tags allow Lowe’s rental equipment to be identified with greater speed and accuracy than was possible with paper-based systems.

Previously each item entering or leaving the warehouse was identified by a six-digit code, which had to be manually recorded by staff using a paper-based system. Now the codes have been replaced by RFID tags, which are detected automatically by RFID readers at the exits and the information downloaded to the database.

The new system enables instantaneous reporting and has virtually eradicated human error. Audits which took one week under the old manual system can now be completed in under half a day, using a mobile phone reader app which can monitor the tags from up to 2m away.

The system uses ultra-high frequency (UHF) RFID tags which are robust, can be read from a distance and without having a line-of-sight to the tag. Data can be collected from a number of tags simultaneously either using hand-held devices or by fixed readers, for example on a doorway.

The system links directly into the company’s CRM system, automating the process and therefore removing any opportunity for errors.

Secret of success with RFID

Success with RFID systems comes from making sure that the demands of the system and the capabilities of the equipment match each other. Lowe Rental uses fixed point readers from Impinj and Android tablets with Bluetooth RFID readers.

Munzi Ali, Technical Director of CoreRFID comments: “With over 20,000 items which are constantly on the move, Lowe’s operations rely on a fast and accurate tracking system. RFID technology fits the bill perfectly and offers huge potential to improve efficiency. The technology is also quick and easy to install and offers rapid return on investment.”

UHF RFID tags can be read automatically at greater ranges than low frequency and high frequency tags. Standardised coding systems used on the tags allow a wide range of items to be uniquely identified in a way agreed globally. Tags can be small enough to identify almost any item and robust enough for extreme temperatures and chemically hazardous areas.
UHF systems can detect multiple tags simultaneously, for example as a pallet containing multiple items passes through an RFID monitored doorway or portal. Portals can detect the direction in which tags are moving or to triangulate the position of a tag in a warehouse to identify its location within a metre or so.

Find out how @SpanSetLtd used our CheckedOK system to develop and improve its lifting and safety inspection busines… https://t.co/8bDhfSmll1
Great to catch up with our colleagues from the industry at @LiftEx_LEEA - including our longstanding contact Doug… https://t.co/tuvxX9r3Vy
We're delighted to be back at @LiftEx_LEEA and meeting contacts old and new. Visit us on stand 38 and see our Check… https://t.co/omqMjgUgyH
This website uses cookies to improve your experience. We'll assume you're ok with this, but you can opt-out if you wish.Accept Read More
Cookies Policy